The Eclipses of October

Posted on September 30, 2014 by astroteacher

Viewable from anywhere on the nighttime side of Earth, an eclipse of the Moon occurs when the Moon passes through Earth’s shadow. A partial lunar eclipse takes place when only part of the Moon is shadowed from the light from the Sun. In the early morning hours on Wednesday, October 8, the Moon will find itself entirely engulfed by shadow.  Here in San Francisco, the Moon will start passing through Earth’s umbra, the darkest part of the shadow at 2:15am PDT, with totality beginning at 3:24am and lasting just over an hour until 4:25am.  The Moon completely leaves Earth’s umbra at 5:35am. 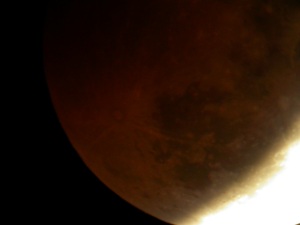 Two weeks later, on Thursday, October 23, the Moon will pass between the Earth and Sun, obscuring a portion of the solar disc. Conveniently timed in the mid- to late-afternoon, almost everyone in North America will have an opportunity to view this partial solar eclipse.  Starting at 1:52pm PDT for San Francisco, the eclipse will last until 4:32pm.  The maximum eclipse is at 3:15pm, with 39% of the Sun covered by the disc of the Moon.  The centerline of the Moon’s shadow on Earth follows a path almost due north from Alabama through Indiana and Michigan up to Hudson’s Bay, then curving across the Canadian Arctic, over the Arctic Ocean north of Alaska, then across eastern Siberia and heading out to sea at the southern tip of the Kamchatka Peninsula. Observers in the Canadian Arctic will see the Moon obscure over 70% of the Sun.

Take a 1-inch diameter ball (the Earth), and a ¼-inch diameter bead (the Moon). Attach them 30-inches apart on a yardstick or other object. In the middle of a darkened room set up a single light bulb or flashlight in candle mode to serve as the Sun. Line up the “Earth” and “Moon” with the “Sun” to make a lunar eclipse where the bead is in the shadow cast by the larger 1-inch ball. Try using a piece of white paper as a screen behind the bead so you can see where the shadow is so you can make an alignment. How much of the Moon is potentially covered by the Earth’s shadow? Try making a partial lunar eclipse. If the Moon were not in the Earth’s shadow, what phase would you observe from Earth?

A couple of other interesting questions: why do lunar and solar eclipses only take place twice during the year? And, why do solar and lunar eclipses come in pairs with two weeks in between each event?

You can find additional information, diagrams, and tables of eclipse times for your location at the NASA Eclipse Website at:

***Be sure to use save solar viewing practices!***

You can find information on how to safely view the Sun (even during eclipses!) at: http://eclipse.gsfc.nasa.gov/SEhelp/safety.html

This entry was posted in Astronomy, Science Education. Bookmark the permalink.