A Pilgrimage to a Volcano

At approximately 8:30am on Sunday, May 18, 1980, I unexpectedly woke from a sound sleep.  At the time it seemed odd I woke at that particular time.  As the morning progressed, it was evident many others around western Washington state noted the sound of a large explosion at the same time.  While I have no memory of any sounds, it is almost certain my waking was in response to the eruption of Mt. St. Helens, about 100 miles to the south.  For the rest of the day, I watched the news, with updates on the massive eruption.  My parents, in East Wenatchee, Washington, were on the edge of the resulting ash cloud, as well as for subsequent eruptions.

It wasn’t until the summer of 1982 when I got my first good look at the mountain.  Working as a field assistant for Paul Hammond, a Portland State University geology professor, we were mapping lava flows in the Indian Heaven area between Mt. Adams and Mt. St. Helens.  The area was newly removed from the red zone around Mt. St. Helens, and the USGS, who was supporting our work, were interested in investigating the history of volcanic eruptions in the region in greater detail.  Out of the crater came a constant plume of steam and ash, with periodic larger pulses. 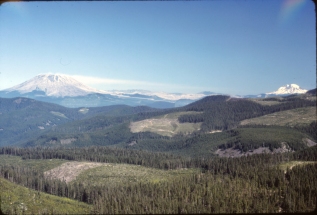 In 1987, the US Forest Service reopened the mountain for climbing.  A group of us took advantage, and ascended the truncated peak on July 25, 1987.  While not a technically difficult climb, the route follows the Monitor Ridge lava flow, then on to the ash and pumice covered upper slopes.  A second climb, on July 8, 1988, provided a contrasting experience.  More snow in 1988 made for an easier climb, as did a smaller group more interested in looking at the geology of the mountain, rather than the novelty of the experience.  The second group included my undergraduate geology professor, Edwin Olson, and fellow geologist Gary Paukert, along with Barb Paukert, and Peter, a friend of Ed’s from Switzerland. 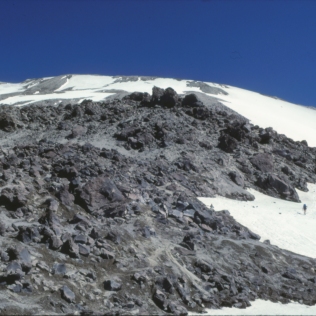 Looking upslope towards the summit, July 8, 1988 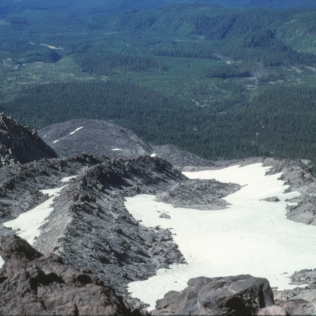 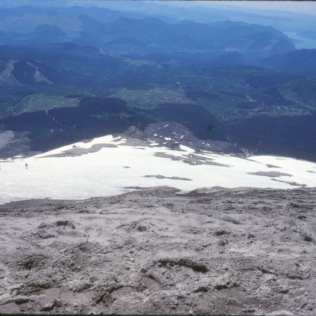 The view from the summit was astounding!  While in 1987 the crater was filled with clouds, presenting only glimpses of the dome, 1988 was clear, with views north to Spirit Lake, and beyond to Mt. Rainier. 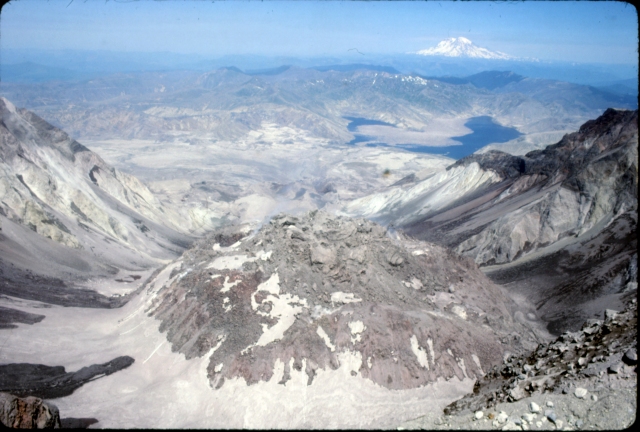 The following year presented what was, at the time, a unique opportunity.  Returning to Portland from a wedding in Spokane, I was told if I wanted to go on a field trip to Mt. St. Helens with Paul Hammond, along with USGS geologist Donald Swanson, I should show up at the meet up spot at Portland State at 4:30am the next morning.  So, on September 24, 1989, I found myself on a hike into the closed areas north of the volcano, eventually climbing up into the crater, and on to the lower slopes of the dome.  Along the way, we crossed the desolation of the pumice plain, examined the surfaces of pyroclastic flows, and explored newly incised canyons in the debris filling the northern breach of the crater.  A new waterfall, Loowit Falls, with water flowing out of the upper reaches of the crater, and canyon wrens newly resident calling from the surrounding cliffs. Looking down the Toutle River valley, Spirit Lake on the right Looking towards Coldwater Ridge, and the landslide debris that carried up over the ridge Climbing through layers of pyroclastic debris Many years passed, as I found myself living far from the mountain.  In June 2018, the opportunity presented itself to revisit Mt. St. Helens, venturing up the road to the visitor center on Coldwater Ridge.  A hike to Harry’s Ridge brought back memories of thirty years before, when annual pilgrimages to the mountain were a regular occurrence. 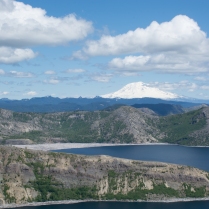 Spirit Lake with Mt. Adams in the distance, note the downed trees on the ridge between the arms of Spirit Lake 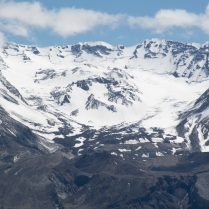 The crater of Mt. St. Helens 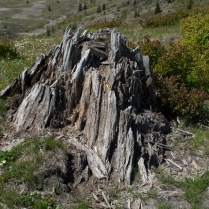 A stump has the evidence of how the eruptive blast of May 18, 1980 ripped the tree apart A carpet of Indian Paintbrush on Coldwater Ridge

The changes in the mountain, and surrounding areas are tremendous.  Life has regained a foothold, with green covering the slopes which once were a uniform gray and brown, devoid of plants.  Trails now take people into areas once off limits, and it is no longer a novelty to find oneself in the midst of a volcanic landscape.  Though it does give one pause, as most visitors see the volcano as inactive and benign.  With the eye of geologist, with a different appreciation for time, this is just a brief interlude in the continuing process of volcanism.  An interlude where life and erosion hold court.  In time, a short time to a geologist, Mt. St. Helens, and the other quiet volcanoes of the Cascade Range, will erupt again.  Destroying, and renewing the landscape, a testament to the dynamic planet we live on.

In some ways, we owe our very existence to volcanoes, as they replenish the atmosphere with essential gases, an important step in the ongoing global recycling mechanism called plate tectonics.  Some astrobiologists and planetary geologists even go so far to suggest the presence of plate tectonics is a limiting characteristic of planets for the presence of life.  Something to reflect on the next time you hear of a destructive volcanic eruption.  Perhaps better to think of it as a constructive event, ensuring the habitability of the Earth, the only home our species has.

This entry was posted in Earth History, Uncategorized. Bookmark the permalink.

1 Response to A Pilgrimage to a Volcano